All of the tools developed by NINES are available for download or online use. More information about each can be found by clicking the corresponding links.

Collex is the collecting/exhibiting tool that powers NINES. Visit the Collex page and the Collex blog to learn more. 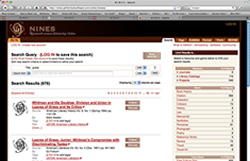 Juxta is a textual collation tool for scholars. Visit the Juxta page and the Juxta blog to download the newest version.

Ivanhoe is an interactive playspace for exploring textuality. Visit the IVANHOE page and the Ivanhoe blog to start a new game.

The development of these standards-compliant, open-source technologies began under the auspices ofApplied Research in Patacriticism (ARP) and the Speculative Computing Laboratory (SpecLab), its research affiliate at the University of Virginia. SpecLab was originally formed by Johanna Drucker andJerome McGann as a theory-discussion group devoted to conceiving (and conceptually designing) software that would answer to the critical/interpretive needs of humanities scholars.

With Mellon funding, ARP, the the software development arm of NINES, was formed. IVANHOE,Juxta and Collex were among the first working projects, and remain under development to varying degrees by NINES. While the Collex interface is an integral part of NINES, we believe that our mission can be greatly advanced if it also pursues significant software development work that will excite humanist scholars.