Last year I wrote a post leveraging the new analytics data we’d begun keeping for NINES, breaking down our site activity based on new members, tagged and collected objects. When starting a tradition such as this, one always hopes that each year will be better than the last — and I’m happy to say that […] 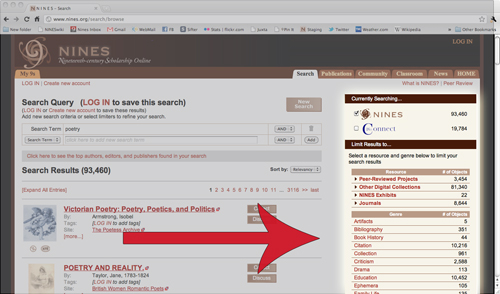 Like most finding aids, NINES offers users various options for constraining searches. You have the choice of  adding other search terms, phrases (exact searches can be completed by putting the phrase in quotation marks), names, or even a date (in YYYY format). But on the right-hand side of your search screen, NINES offers a number […]

New Resource in NINES: The Journals of Lewis & Clark Online

The University of Nebraska – Lincoln’s superb resource, The Journals of Lewis & Clark Online is now available through NINES. From the print edition edited by Gary Moulton, the NEH-funded resource is overseen by an editorial advisory board and now includes over one thousand rigorously encoded digital objects. The site features audio, video, text and […]

In addition to the blog, we’ve set aside a thread in the NINES Forum for feature suggestions or questions about the site. Have you had trouble finding something in NINES? Are there new ways to work with your data that you’d like us to explore? Sign into your account and head on over to let […]

Until recently, sites peer reviewed and federated into NINES could be most quickly identified by visiting the NINES website itself. In an effort to make this process simpler, we’ve created a badge that also serves as a search widget, seen here on the home page of the Poetess Archive. From this box, users can open […] 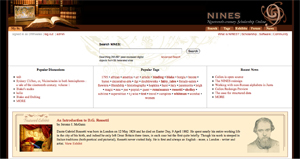 We’ve been adding a number of resources to NINES in the past few months, which might make it tough to keep up with all the new material. In addition to saved searches (which apply your preferred constraints to the ever-growing body of objects on the site), the NINES tag cloud can be a useful way […] 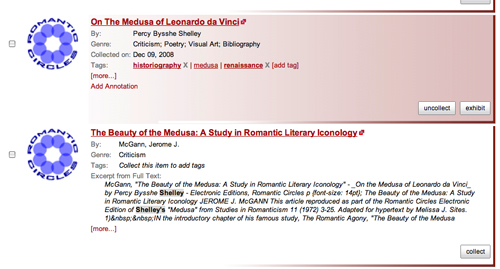 When you log into NINES today, you may notice some changes to the interface. We’ve polished our search results so that they’re easier to read at a glance: the title is larger and more eye-catching, and we’ve re-ordered the object metadata for better browsing.   User tags have now been exposed for each object, […]

You can save your searches in NINES and share them with others. Permalinks were broken temporarily when we launched the redesign, but we’ve brought them back and made them easier to use. Just sign into your account and save your results from the search screen. In your list of saved searches on the My 9s […]