[Written by Joanna Swafford and cross-posted from https://annieswafford.wordpress.com/2015/10/07/pedagogical-outreach-for-nines]  I’m happy to announce that I am now on the NINES Executive Council as the Head of Pedagogical Outreach! I’m honored by this new position, and I’m eager to start! In the coming weeks and months, I hope to do a survey of how the projects NINES has […] 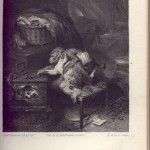 Image of the Week: Cats and Monkeys

Today’s image of the week comes to us from The Poetess Archive. Entitled The Cat’s Paw, the image appears in Forget Me Not, A Christmas and New Year’s Present for 1831. Created by artist Robert Graves and engraver Sir Edwin Henry Landseer, the piece depicts a monkey using a cat’s paw to push what appear to be hot […]

Posted in victorian | Leave a response

This sheet music for “I come! I come!”  by J. Z. Hesser came with a “portrait” of Queen Victoria, which seems to be distantly descended from George Hayter’s state portrait.

Image of the Week: Portrait of a Housekeeper

In honor of this past weekend’s U.S. premiere of Downton Abbey’s Season 3, this week’s image is an ambrotype from the Museum of Photographic Arts Collections depicting a woman dressed as a housekeeper. On the other half of the frame, we see the fence and gate to a large house – perhaps the very one […]

Image of the Week: The Ghost of Greythorn Manor

Happy Halloween from all of us at NINES! Enjoy more spooky results in NINES.

Image of the Week: The Upper Wards of Windsor Castle

This aquatint of Windsor Castle, in the English county of Berkshire, was created by Charles Wild and engraved by Thomas Sutherland in 1819 for an illustrated history of royal residences by W.H. Pyne. It shows the nineteenth-century upper wards of of the palace, flanking the older, medieval round tower of the original Normal castle. After its renovations […]