[Written by Joanna Swafford and cross-posted from https://annieswafford.wordpress.com/2015/10/07/pedagogical-outreach-for-nines]  I’m happy to announce that I am now on the NINES Executive Council as the Head of Pedagogical Outreach! I’m honored by this new position, and I’m eager to start! In the coming weeks and months, I hope to do a survey of how the projects NINES has […]

[Cross-posted at juxtasoftware.org] Every now and then I like to browse the project list at DHCommons.org, just to get an idea of what kind of work is being done in digital scholarship around the world. This really paid off recently, when I stumbled upon Digital Thoreau, an engaging and well-structured site created by a group from SUNY-Geneseo. This […]

To accompany this week’s image, NINES Fellow Elizabeth Fox assembled all five copies of Abraham Lincoln’s Gettysburg Address into one comparison set in Juxta Commons and collated them to see how they differ.  Use the embed window below to peruse a heat map of this collation, with the Nicolay Copy as the base text. […]

The Quandary of the Young Academic and #twittergate

About a week ago, in the between SGA phone calls and Juxta testing, I found myself looking at another digital product: Twitter.  In particular, I found myself reading tweets and retweets, blog posts and articles about what has since become known as #twittergate.  (I have to take a moment here to thank Annie Swafford, who […]

Heather Bowlby is a PhD student in Victorian Literature at the University of Virginia and 2011-2012 NINES Fellow. In a recent article in The Chronicle, “How Not to Reform Humanities Scholarship,” Gary Olson addresses the role of emerging digital methodologies in efforts to reform humanities scholarship. The increasing call to refashion humanities research by means […] 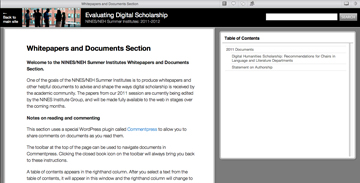 The first two documents produced during our 2011 NINES / NEH Summer Institute on Evaluating Digital Scholarship have been released: a Statement on Authorship and a set of Recommendations for Chairs of Language and Literature Departments for creating an atmosphere that is conducive to work in new media. We have others in the pipeline and […]