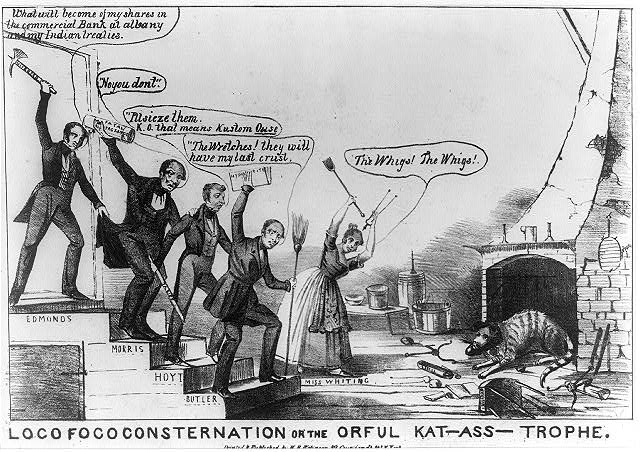 This print from the Library of Congress is a satirical take on the Glentworth scandal of 1840, in which a tobacco inspector plotted to sway a New York election for the Whigs by illegal means. Originally, the term, “Locofoco” referred to a radical faction of the Democratic Party who were strongly in favor of workers’ unions and anti-monopoly, but by the time of this drawing, the term had been generalized to refer to all Democrats.

In an attempt to mock attempts to sensationalize the scandal, the artist has portrayed Glentworth himself as a large cat causing a ruckus in the kitchen. Scullery maid “Miss Whiting” (a reference to New York District Attorney James Whiting)  shouts, “The Whigs, The Whigs” as four prominent members of the Democratic Party come thundering down the stairs to intervene.